Did you spot the hotel resort in tonight’s episode of X Factor? Tulisa Contostavlos, and her entourage chose to film and scrutinise her contestant’s vocal talent in style at the gorgeous Anse Chastanet, St Lucia. We spoke with Jade Mountain and Anse Chastanet owner, Karolin Troubetzkoy, who gave us the exclusive insight into Tulisa and the X Factor’s experience filming at Anse Chastanet.

“When you’re holidaying at Jade Mountain St Lucia, things tend to be pretty quiet as everyone is either relaxing in their infinity pool, exploring the ocean floor, scuba diving, zip lining, mountain biking, or experiencing a variety of other activities. So when guests heard a squeal of excitement break the calm serenity of the resort, there was a huge temptation to peer through sanctuary doors to see what all the commotion was about. There in front of the resort was Tulisa and her entourage.”  Had X Factor really come to Anse Chastanet? Guests holidays suddenly were all about keeping up with the goings on of the X Factor! 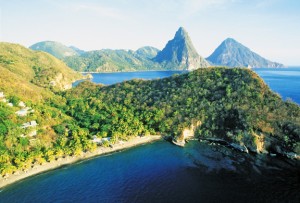 Several lucky guests had dinner at Trou au Diable, the delicious beach restaurant at Anse Chastanet, where they sat next to the judges. The contestants were off to bed early after dinner whilst guests danced away into the night at Anse Chastanet as the local steel band continued to entertain into the wee hours.

Guests could see the camera crew filming Tulisa crossing the bridge into her sanctuary as the contestants were being filmed walking up and down the beach. In the afternoon the contestants had more hard work ahead of them as the judges were dispatched off on a half day yacht cruise around the glorious Pitons.

Everyone had had a great time down at the beach with standing room only in the beachbar! On the way to breakfast guests were serenaded by the contestants as they warmed up (singing that is). And hey, there was a new face at breakfast: Dermot O’Leary arrived! But we couldn’t hang around… Zip wiring, diving and spa treatments await! 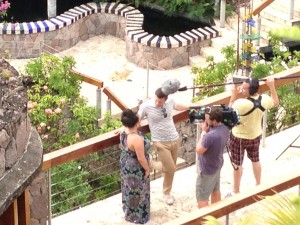 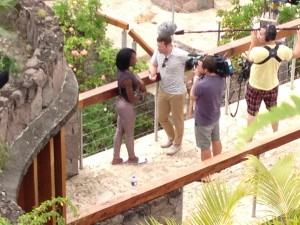 For the faint hearted that want to appear ‘warrior brave’– the Zip Wire at Morne Coubaril Estate is just the ticket, picturesque with views over the Pitons, Mount Gimie (highest peak in St Lucia at just over 3,000 ft), lush rainforest and water traps.

A return to Jade Mountain and X Factor was in full swing as contestants; one by one nervously climb the steps to the Jade Mountain Club and eventually up to the Celestial Terrace for the make or break moment. 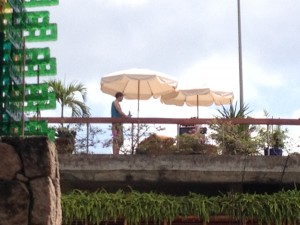 The crew we hear were up for a 3am breakfast – the last day and results day – a real dilemma for us – half want to go to the beach and half want to see who’s got through – eventually some sort of compromise is reached: for the first 4 hours we stay indoors sneaking a peak and  the last 2 we head down to the beach from our top floor sanctuary while still occasionally craning our necks for a view. So there it is we’ve seen it: 2 are clearly through, 2 are inconsolable and in true X Factor fashion 2 wouldn’t tell! By 1.30pm it’s all over and they’re on their way back to the airport. Later we catch up with the gossip – some of which must be of course is said in the old travel saying: what happens away, stays away! But now we know who really did get through and one of the unlucky ones who through floods of tears confessed her love for Anse Chastanet and promises this is where she is to be married!

So I will leave the surprise of who ended up going through to tonight’s episode, I for one will enjoy revisiting the beauty that was Anse Chastanet and Jade Mountain in St Lucia.

An Evening With Park Hyatt

An Evening With Park Hyatt