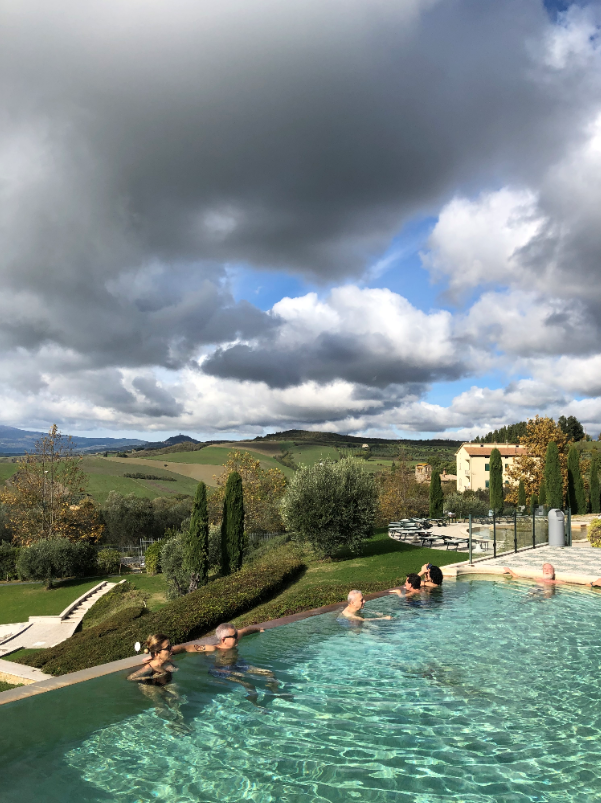 A Postcard From… Tuscany

It’s late afternoon as we drive through the picturesque Val d’Orcia valley, and the November sun is starting set behind the iconic undulating hills of the Tuscan countryside. A few winding roads and many cypress trees later, we reach Fonteverde Spa, and, what better way to settle into a dedicated health and wellbeing hotel, set amid precious thermal springs, than bathing in the natural healing waters of the outdoor pool under a twinkling night sky?

Built in the 17th century by the Grand Duke of Ferdinando I de’ Medici, Fonteverde maintains its renaissance-inspired décor, with its ancestral portraits and majestic architectural touches running throughout. Set upon natural thermal springs, Fonteverde’s indoor and outdoor pools are fed by San Casciano dei Bagni’s hot spring waters, renowned for their therapeutic properties since ancient times.

Sampling an array of exquisite local wines from the nearby Medieval town of Montepulciano with the hotel’s in-house wine sommelier, whets my appetite for authentic Tuscan dishes, of which I am served in the hotel’s refined Fernando I restaurant.

Admittedly, it takes effort to change from my fluffy spa robe and cosy slippers into attire more suited to outdoor pursuits, however, with the region at this time of year renowned for hunting of black truffle, I was not going to miss out. Led by Fonteverde’s expert truffle hunter and his curly-haired puppy apprentice through the neighbouring forest, we successfully sniff out the sought-after ingredient and take it back to the hotel’s chefs, who specially whip up a tantalising bowl of fresh pasta, topped with lashings of our prized truffle, and accompanied by a welcomed glass of the region’s finest red. A feast well earned.

A Postcard From… Lanzarote

A Postcard From… Lanzarote