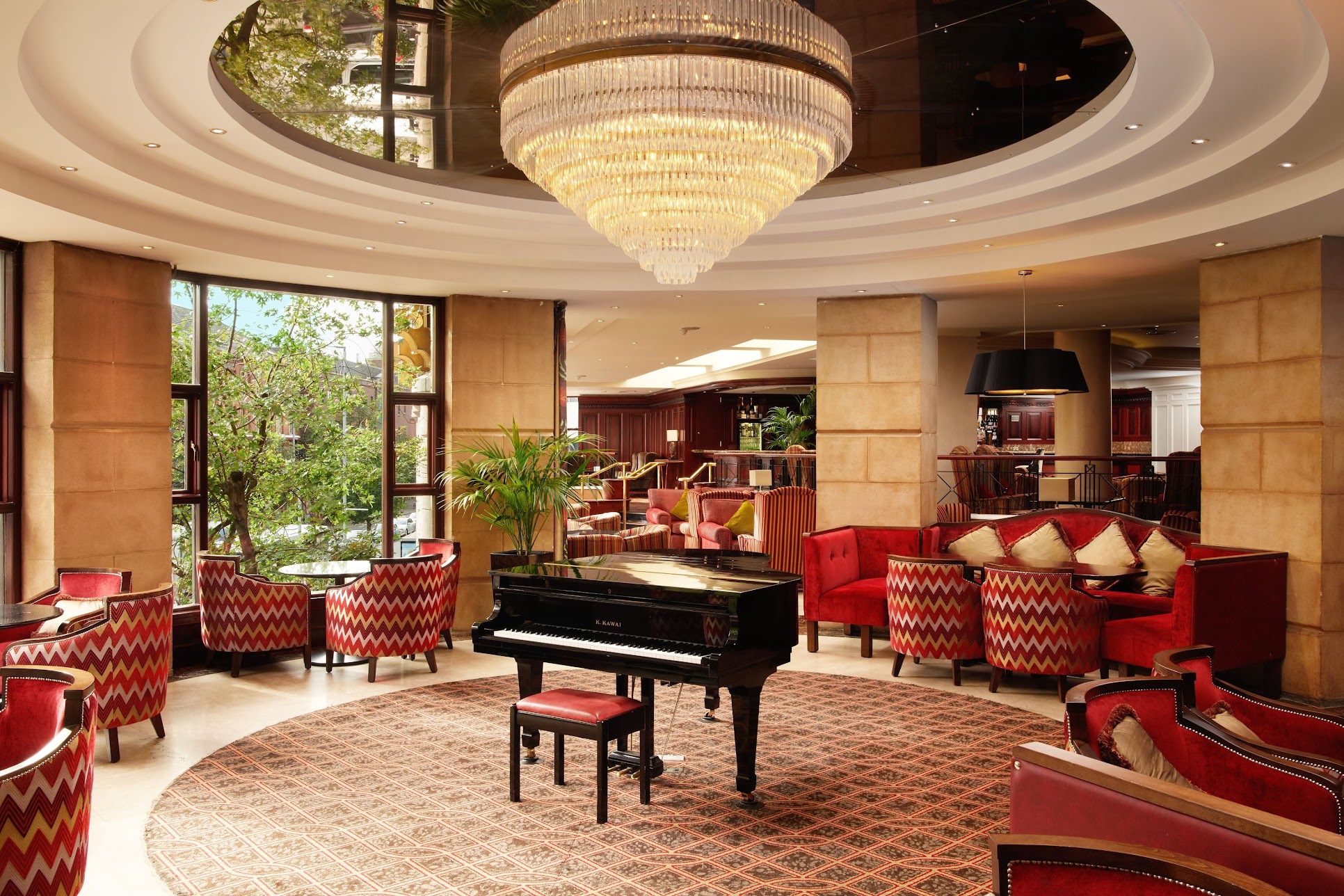 A Postcard from… The Europa Hotel, Belfast

Last month I was lucky enough to be invited to celebrate the 50th anniversary of the iconic Europa Hotel in Belfast with Hastings Hotels.

From the moment we landed until the moment we left; we were enriched in so much history. Through my trip, I really discovered what the city of Belfast has been through and how it has triumphed – coming out the other side as a poignant and significant city in the modern world. And throughout The Troubles, the Europa Hotel has stood strong (even with a few missing windows here and there).

The Europa Hotel opened its doors in 1971 during an intense time for Belfast. During The Troubles, the hotel was home to now world-renowned journalists such as Sir Trevor McDonald and was bombed over 30 times between 1970-1994, gaining its title ‘The world’s most bombed hotel’. 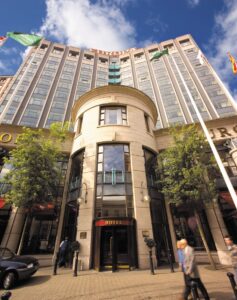 In 1993, Sir William Hastings of Hastings Hotels took over the hotel, even though it was hard to believe at the time that Northern Ireland would ever be seen as a tourist destination. The pioneering hotelier invested £8M and reopened the hotel in 1994.

The Europa Hotel is part of the peace story of Northern Ireland and has transformed into an iconic symbol of Belfast’s survival, which is why the hotel was delighted to celebrate its 50th anniversary. The hotel welcomed guests from around the UK and Ireland to celebrate this significant milestones.

The celebrations began in the Lobby Bar, where guests were greeted with a glass of Champagne or Black Velvet. We were welcomed by long-time employee James McGinn, newly appointed Director of Hastings Hotels. After a lovely speech, we were all handed a lovely pick n mix bag of candy before we headed off to the Queen’s Film Theatre for a private viewing of the fabulous film “Belfast”, starring the charming Jamie Dornan and directed by the Belfast local, Kenneth Branagh. The film perfectly set the mood of the celebrations of the history of Belfast and the Europa Hotel. It also didn’t hurt that we were able to see the handsome Jamie Dornan sing and dance! 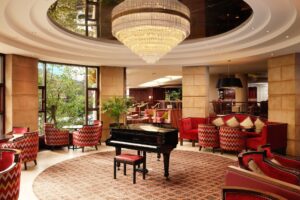 After the film, we headed back to the hotel, where we were directed to the hotel’s Penthouse, with lovely décor and an iconic golden Hastings Hotels duck at each seat for guests to take home with them as a souvenir. The theme for the evening was the 1970s, to set the scene of the start of the historic hotel. We were greeted by Julie Hastings, the Marketing Director of Hastings Hotels and one of the daughters of Sir William Hastings. The fabulous Julie kicked off the event with a touching speech and introduction to an incredible documentary done for the hotel’s 40th anniversary in 2011, The Europa Hotel – Bombs, Bullets and Business as Usual, aired by BBC One.

After the film, we heard from the incredible Howard Hastings, the former Director of Hastings Hotels and son of Sir William Hastings. Howard shared heart-warming memories of his time with his father and at the hotel over the years, which led us perfectly in time for the lovely 70’s themed meal. Starting with a classic British appetizer, prawn cocktail, then leading into a tender beef wellington and finishing off the night was a baked Alaska! After a fabulous evening, we retired to our lovely rooms in the hotel and had the best night of sleep with the most amazing pillows and Hastings’ renowned ‘Cloud Beds’. 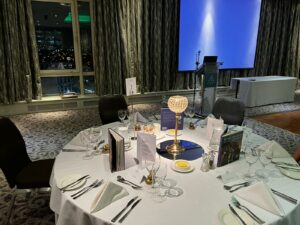 The next day, we were all up bright and early to begin a full day’s tour of everything Belfast has to offer. We were able to join three iconic tours in one day courtesy of Visit Belfast and Tourism Northern Ireland. Kicking off the day with the impressive Titanic Museum (anyone who is a history buff or just obsessed with the film should add this to their bucket list). Moving onto a delicious food and drink excursion with the fantastic Taste and Tour group (the tour’s highlight was a local hotspot, Sawers Deli). Finishing the day with a tour led by Dee Morgan, a Blue Badge Guide, who took us around the amazing landmarks in Belfast- landmarks including the literary statues from C.S. Lewis’ The Narnia Chronicles. 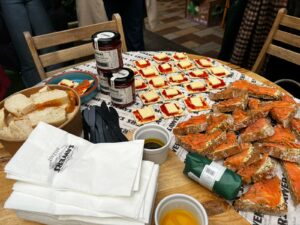 After a fun-filled day of tours and food, we ended the night with a fabulous meal at a local favourite, James Street and a nightcap at the incredible Observatory at the Grand Central Hotel, which not only boasts impressive views of the city but has tasty cocktails.

We couldn’t leave Belfast without doing a world-renowned Black Cab tour, so we scheduled one more tour on our last morning. During this experience, we were able to get more up close and personal with the history of Belfast. We drove through and stopped in the different neighbourhoods of Belfast. We were able to see some unique artwork that seemed to be all over the walls of buildings. The artwork was either personal or political, meaningful to those in the neighbourhoods. We were able to stop and walk along the peace wall, which brought us back in time and gave us a better understanding of the separation on each side of the wall. The Black Cab tour is defiantly not one to miss when in Belfast, especially if you are someone who truly enjoys digging into the culture and history of the places you visit.

The Europa Hotel and Belfast have been through an astounding amount over the years and the hotel truly deserves this big celebration. So, Happy Birthday, Europa Hotel, and cheers to 50 more! 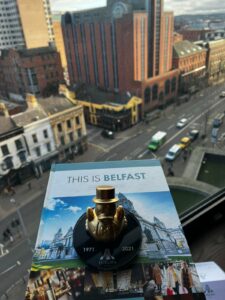 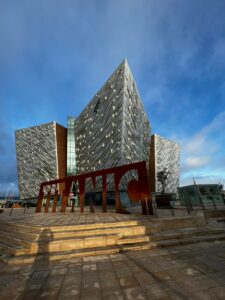 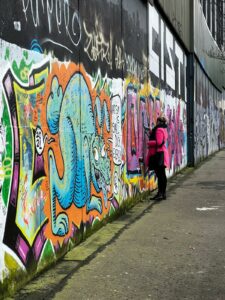 A Postcard from… St Lucia

A Postcard from… St Lucia